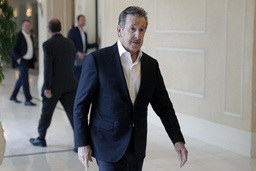 ANAHEIM, Calif. (AP) A person with knowledge of the decision says the Los Angeles Angels have narrowed down a field of five candidates to be their next general manager.

The person spoke on condition of anonymity Tuesday night because the Angels aren't publicly disclosing details of their search.

The Angels have been without a general manager since Sept. 27, when owner Arte Moreno fired Eppler immediately after the conclusion of Los Angeles' fifth consecutive losing season during his tenure.

Hollander spent nine seasons in the Angels' front office before rejoining ex-Halos GM Jerry Dipoto with the Mariners in 2016.

McLeod was in charge of amateur scouting and player development for the Cubs until last year, when he received a promotion after being linked to bigger jobs with San Francisco and Minnesota. He worked with Angels manager Joe Maddon while both were in Chicago.

Sawdaye has spent the past four seasons with Arizona after 15 years with the Boston Red Sox, while Porter also spent a decade in Boston followed by a year with Maddon and the Cubs before he joined the Diamondbacks four years ago. Both men worked in Boston with Mike Hazen, Arizona's current GM. Porter has been a part of four World Series championship teams between Boston and Chicago.

Eppler took the fall for the culmination of a mostly miserable decade-plus of baseball under Moreno's leadership. The Angels have missed the playoffs for six consecutive years, and the big-budget franchise hasn't won a postseason game since 2009 despite a roster that features Mike Trout, Anthony Rendon, Shohei Ohtani and Albert Pujols.

The Angels went 26-34 in the pandemic-shortened season, failing to make even the eight-team AL playoff field. They've endured five straight losing seasons for the first time since 1977, and their winning percentage over the past two seasons is the Halos' worst two-year run since 1992-93.

© 2021 by STATS PERFORM.
Any commercial use or distribution without the express written consent of STATS PERFROM is strictly prohibited.